A Christmas decoration is any of several types of ornamentation used at Christmastime and the greater holiday season. The traditional colors of Christmas are pine green (evergreen), snow-white, and heart red. 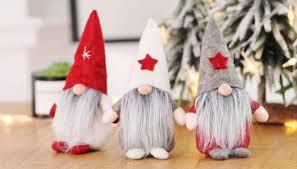 Blue and white are often used to represent winter, or sometimes Hanukkah, which occurs around the same time. Gold and silver are also very common, as are other metallic colors. Typical images on Christmas decorations include Baby Jesus, Father Christmas, Santa Claus, and the star of Bethlehem.

Typical winter icons include snowflakes, snowmen, icicles, and even penguins and polar bears.[citation needed]
In many countries, such as Sweden, people start to set up their Advent and Christmas decorations on the first day of Advent.[1]
[2] Liturgically, this is done in some parishes through a Hanging of the Greens ceremony.

[3] In the Western Christian world, the two traditional days when Christmas decorations are removed are the Twelfth Night and if they are not taken down on that day, Candlemas, the latter of which ends the Christmas-Epiphany season in some denominations.

[4] Taking down Christmas decorations before Twelfth Night, as well as leaving the decorations up beyond Candlemas, is historically considered to be inauspicious.[5